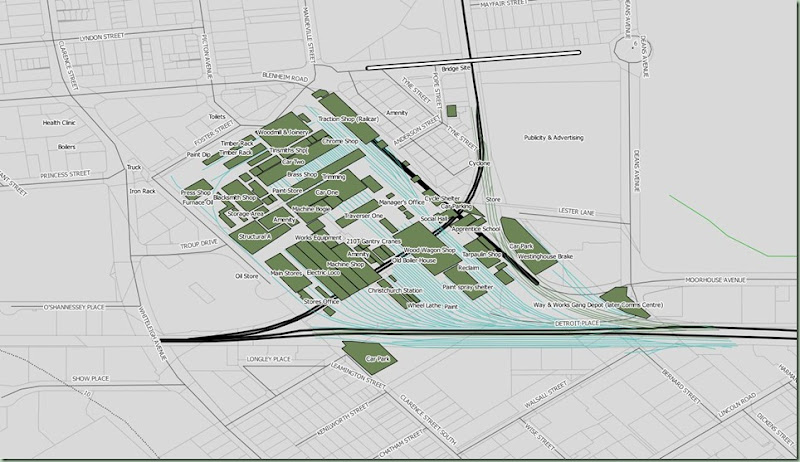 This plan is traced from an old hand drawn diagram of the Addington Workshops site. Click on this picture to see a larger one. I am still working on this one and it will be made a bit better as time goes on.
This one shows just the tracks. 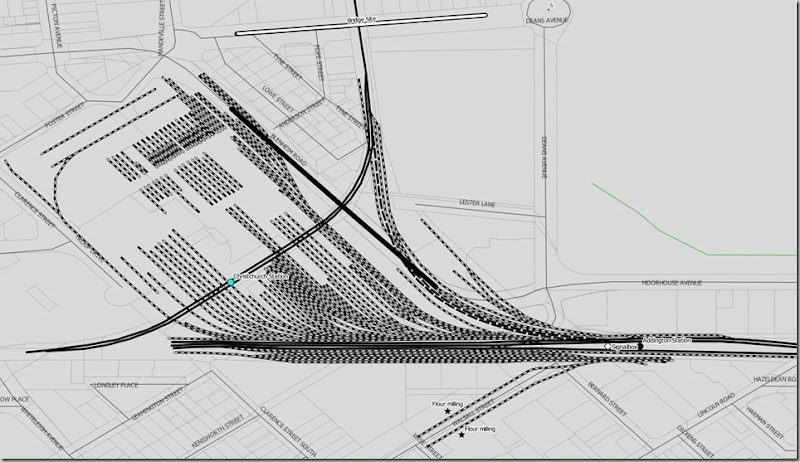 In the maps I have split Addington into 1982 and 2009 views. Therefore instead of combining elements of both into one plan, the distinct eras will be shown in the separate plans. Therefore the two sets of main lines going north will be in the two separate plans. The above is a combined plan, but since then the details have been split out.
I was surprised when I mapped in the old MNL curve that it went under the current Blenheim Road bridge. I had always assumed it went through the area where the Way and Works depot sidings are to the right. But this area – still unbuilt on today – was actually used for carparking at the workshops. 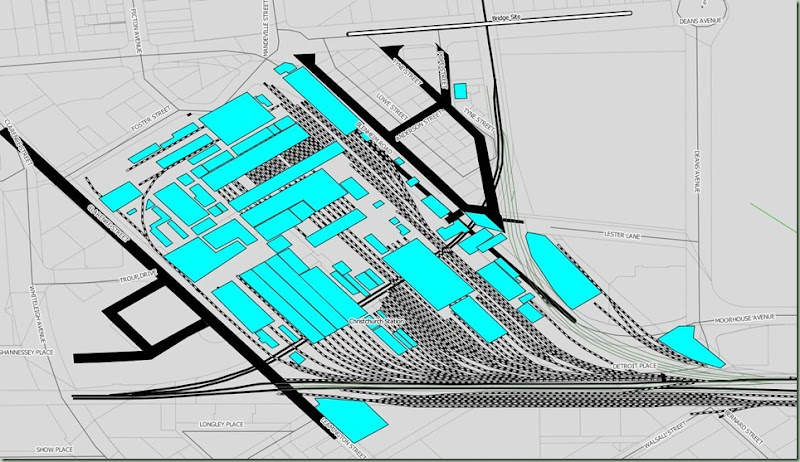 This plan is similar to the above one except it shows the buildings and land use around the workshops. It also shows some of the roads which have changed. Whiteleigh Ave was not built through then, even although it existed on the south side. Clarence Street went across the railway tracks just outside the entrance of the current station and then traffic had to make two sharp 90 degree turns to get onto Whiteleigh Ave which went through to Barrington Ave. Putting Whiteleigh Ave through was a necessary roading improvement and it was done around 1989 from memory. It went either along one side of , or possibly through, the Plant Zone site which I have not shown on this plan, that is still to be added. Going off Clarence Street on the left, Margaret Street, Bell Street and Levin Street were where railway houses were built for the workers at the workshops. These streets are all gone now. At the top right, changes were made in Lowe Street and Tyne Street. The level crossing across Lowe Street to Lester Lane was closed and the end of Lowe Street and Tyne Street was cut off when the new curve tracks were built from the new railway station in the 1990s. The most recent change, about ten years ago, was the closing of the Blenheim Road bridge at the top of the picture. The new bridge went through what used to be the railcar shops and the site of a few other buildings as well. So there is a lot of history now gone in that area.
Posted by Kahukowhai at 21:42